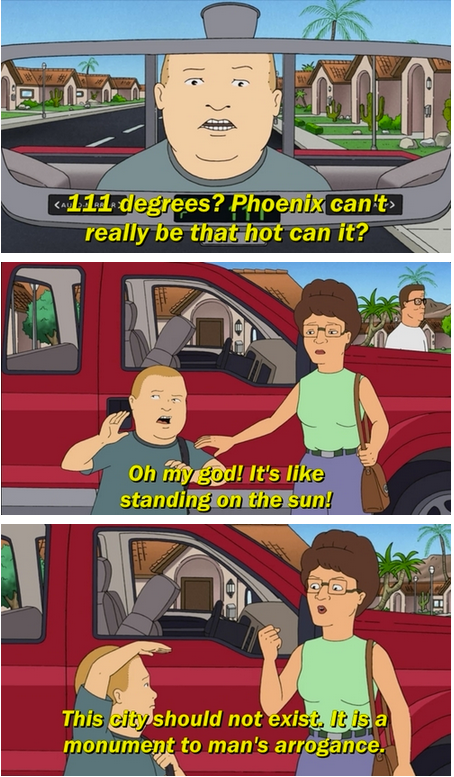 I feel ya, Bobby.

I rolled into our Phoenix Operating Center on a Sunday afternoon, and didn’t leave until Wednesday afternoon. I’ve rarely been more miserable in my life.

The Schneider Operating Center in Phoenix, Arizona will eventually be a brand new state-of-the-art complex with all the necessary driver amenities, and hopefully will be open by next year. The current Phoenix OC has no showers, no wi-fi, two bathrooms (one per gender, truckers tend to be pretty cis that way), no drivers lounge, no laundry, not much of anything, actually.  It’s a poor place to do a 34-hour reset, and worse to do a 34-hour reset in the middle of July.

On Monday, I had the day to myself so I bought an all day bus pass and tried to do some sightseeing around downtown Phoenix.  However, all the museums are closed on Mondays and Tuesdays.  And, well, that was it, really.  Downtown Phoenix is, hands down, one of the most boring places I’ve ever been.  But, I had Starbucks, which I am very grateful for these days.  I’m sure Phoenix has some lovely areas.  Maybe I’ll see them, someday.

I was in Phoenix because, as I had mentioned in my previous post, my truck needed to go into the shop for its quarterly maintenance, and I was scheduled for my three month evaluation.  I will skip to the good stuff, my eval went swimmingly. They had printed out some of my performance stats, some were outstanding, some had room for improvement.  One time I took a freeway on-ramp marked for 20mph at 25mph, they dinged me for that.  It was a wicked decreasing-radius turn that caught me off guard.

I thought I was going to get a driving test, too.  Instead, they took me to their training yard, made me hook up to a trailer, drive around once, back into a space and uncouple.  That’s all, that was the review.  They gave me some good advice (no sarcasm, I had picked up some bad habits that they pointed out), and we’re done until next February.

In a weird way I get the feeling that I’ve slipped through the cracks.  But that feeling is a direct connection to my work history.  In most office jobs I’ve held, there are usually a myriad of middle-managers micro-managing your every move.  Here, I get my assignments over the truck’s computer, I go where it tells me.  I tick off the tasks listed on the computer, and when I’m finished, the computer magically generates another assignment.  I go where it tells me.  Who generates these assignments I have no idea.

I shouldn’t read too much into it, though.  Obviously, they are ok with my performance, so I should be, too.

After I left Phoenix, I arrived at the soon-to-be-closed Operating Center in Fontana, California.

Schneider has almost totally removed itself from California.  Some would say that is in response to California’s tough business climate, but losing big money lawsuits because of dodgy labor practices probably doesn’t help, either.  Regardless, SNI is closing this O.C., and thus will have no more Operating Centers in California.  It is slightly worrying to mostly run in the very state your company is reducing its presence in.

Fontana is set to close by the end of July.  All the furniture had been stacked up, or moved out already.  It was a ghost center.  Empty.  Haunted, surely.

I believe I spent my last night there.

There was a cluster of three for four remaining trucks parked near the O.C. building, but I chose to park out in their huge empty yard, my lone truck and trailer quietly settled in the massive sea of concrete once marked by the noise and bustle of a busy transportation company.

Most trucks have privacy curtains that you close when you sleep, to keep sunlight out, and to also keep out the many wandering eyeballs from transient populations of truck stops.  Here, on that night, I did something I’ve never done before; I left the curtains open. I laid on my bunk and watched the warm California sun set calmly in the west, the sky blending shades of orange and dark purple through my dusty windshield. The silence of the early evening enveloped me as I nodded off.

My last night in Fontana may well be one of the best night sleeps I’ve ever had.